It's easier to make them switch to Low Gl atta.

Why is switching to AASHIRVAAD Sugar Release Control Atta important?

With globalisation of the economy, our diets have undergone a change too. There is an increased consumption of easily available fast food and sugary beverages. Unhealthy meals with high calorie content, unhealthy fat, processed meat, and refined carbohydrates form a major part of the urban Indian diet. These changes in dietary patterns among people lead to excess body weight gain accompanied by increased mortality rates.

Thus, one of the biggest challenges can be to get patients to eat the right food. The first step is to ask your patients to make small changes in their diet. They can be asked to swap unhealthy food items in their meal with a healthy option, so that it doesnâ€™t drastically affect their food habits. Food choices should be aimed at improving overall diet quality.2 They can substitute foods that are high in calories, fat, salt and sugars with healthier options that are low on calories and high on nutrients. They can include more servings of fruits and vegetables. Some of the common Indian food swap options that can be suggested are: 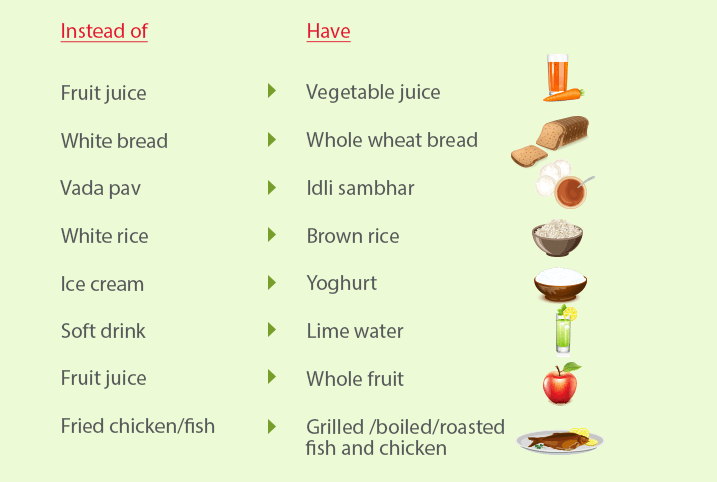 The GI value of food is an important factor to take into account when choosing to eat healthy. Glycemic index (or GI) is a ranking of carbohydrates on a scale from 0 to 100 according to the extent to which they raise blood glucose levels after eating.4 The American Diabetes Association advises people to use the GI as a part of their nutritional management.